Alongside the renowned corporate outfit Cosa Nostra, Inc, the half-finished bridges, the bandy-legged hero cop (“Montalbano sono”) and its incredible history from Greeks and Phoenicians, to a Norman conquest around the same time as the 1066 one us English kids learned about at school, to said Mafia scrapping the nascent Italian state during unification, Sicily also is home to some of the world’s finest pastries and sweets. Or at least, I’m assuming it is – I’ve never been, but base my experience instead on Sicilian pasticcerie I frequented in Rome. Notable among them were Dagnino, an overpriced place near Termini station located in a wonderful 1950s arcade, and Sicilia e Duci on Via Marmorata in Testaccio.

The latter was a fairly regular stop for me as it was on my route home from Piramide and Porto San Paolo station, or from hanging out in Testaccio with Rachel and co. I’ve no idea if their wares are especially renowned, but they did it for me. In particular the various permutations of almond… thing. I never learned what they were called specifically, but looking now it seems such things made with a paste or dough of ground almonds are simply called Paste di mandorla sicialiane (Sicilian almond pastries) or Pasticcini siciliani alle mandorle (little Sicilian almonds pastries). So basically marzipan, and quite possibly a legacy of Arabic Sicilian food culture.

I can’t quite bring myself to call them cookies, as I’m English, but nor can I quite call them biscuits, as they’re not biscotti (“twice cooked”). If anyone Sicilian can tell me a more specific name, I’d love to hear it, as Google has failed me. 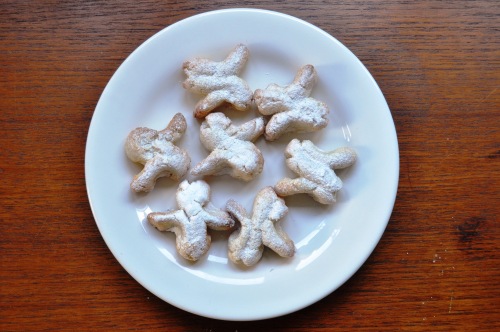 I believe more authentic (whatever the heck that means) recipes would use some bitter almonds, that is almonds of the strain Prunus dulcis var. amara (as opposed to sweet almonds, var. dulcis) that have a particularly distinctive flavour – and certain notoriety for containing traces of Prussic acid, aka hydrogen cyanide. But they’re not readily available in smalltown England, so I just went for normal almonds. In fact, I cheated – I should probably have freshly ground blanched almonds, but just used ground almonds instead.

Boy are they good. I’m eating one as I type, and it’s bringing back memories of indulging in a bagful from Sicilia e Duci.

They’ve got a chewy, slightly crisp crust, and a sweet, moist centre. Morbido is the Italian word. Moreish is another word. It’s probably one of those words that some conceited food writers say should be avoided, but, bollocks, I rarely, if ever, use it, so think I can get away with it here.

1. Preheat oven to 180C (160C fan oven).
2. If you’re using whole blanched almonds, put them in a food processor with 25g of the sugar. Grind to a coarse powder. If you’re using ground almonds, go to step 3. Do not pass Go, do not collect £200…
3. Combine all the ingredients in a bowl, working the mixture with your hands to combine. You want a soft, moist, slightly sandy paste
4. Form the dough into a ball.
5. Sieve icing sugar (aka confectioners’ sugar) onto your work surface.

6. Weigh the ball of paste. It should be about 485g. Form the ball into a sausage, then cut off small portions, each weighing 20g (more or less).
7. Roll the pieces of paste into sausage shapes, about 10cm long and 1cm thick, coating them well with the sugar. 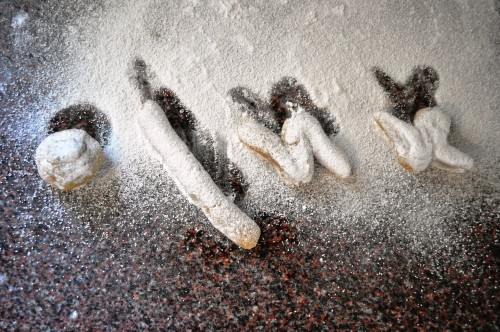 8. Form these into shapes like the letter N, pinching the ends slightly.

9. Place the shapes onto baking sheets lined with baking parchment, leaving a little space between them. They don’t expand much in the oven. 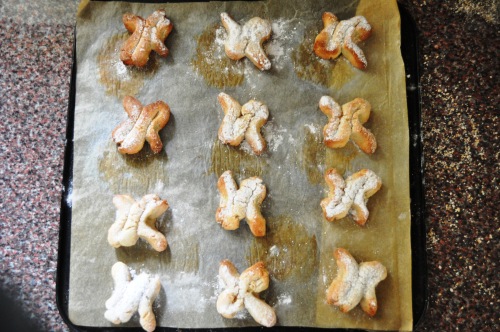 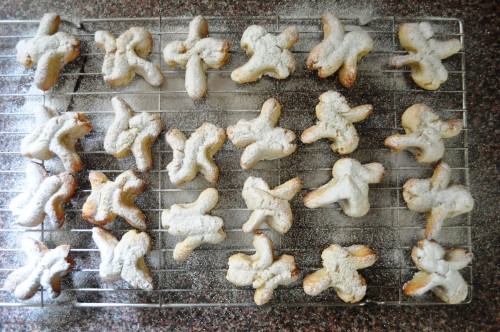 * Recipe based on Biscotti alle mandorle amare found in ‘Biscotti: Recipes from the Kitchen of the American Academy in Rome’ by Mirella Misenti (an actual Sicilian) and Mona Talbot.