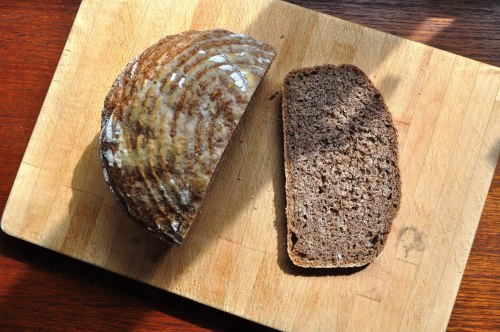 The collection of different flours in my cupboard is getting a bit silly (again). I just can’t resist it when I see a new type I’ve not tried before. In this case, it was some spelt flour, grown and milled by Toos Jeuken, who I buy a lot of my veg from at the weekly Lewes market.

There’s a full profile of the Dutch-born Toos here on The Guardian site, from 2004, and a more recent profile on the market site here. They say she arrived in England on a bike in 1978 and has been farming in Sussex, specifically at Cuckfield, 16 miles from Lewes, since.

I hadn’t really registered that she sold grains as she always has such a wonderful selection of veg at her stall, even now, in the hungry gap. (Spring might be verdant, but traditionally March and April were the time of year when, as Paul Waddington puts it in Seasonal Food, “winter stores ran low and new produce had yet to mature.” Sure, there is still a selection of local produce – last week the farmers’ market had its first asparagus – but it’s a long way from late summer.)

Anyway, at her Laines Organic Farm, alongside all the veg, Toos grows several grains, including oats, barley and spelt. Last week I bought some of her rolled oats (hand-rolled!) and wholegrain spelt flour.

Too many chromasomes
Spelt (Triticum spelta) is an older variety of wheat, less manipulated1 than modern strains of bread wheat (Triticum aestivum). Though they are closely related, with spelt alternatively classified as a subspecies: Triticum aestivum subsp. Spelta. Both are what is called hexaploid plant species – that is, they have six sets of chromasomes. By comparison, more ancient wheats have few sets of chromasomes: einkorn (Triticum monococcum) is diploid, with two sets. Emmer (Triticum diococcum) is tetrapolid, with four sets, as is Durum wheat (Triciticum durum, or Triticum turgidum subsp. Durum) – the wheat most commonly used for pasta, which was domesticated from emmer.

In the issue 19 of ‘True Loaf’, the magazine of the Real Bread Campaign, Penny Williams of the Artisan Bakery School, highlights the importance of long fermentation of proper bread, but also looks at the issue of wheat varieties and how they may affect digestibility. She quotes a 2011 Indian study2 and concern about a potential “impending epidemic” of coeliac and other wheat protein related issues as India transitions from older diploid and tetraploid wheats to hexaploid wheats, notably modern strains of Triticum aestivum. She goes on to quote a 2010 study3 that looks at a broad selection of wheat varieties, with an eye to their “antigenic gliadins” – that is, the gluten proteins that may be responsible for “triggering autoimmune response in people with coeliac disease.”

“The findings suggest,” she writes, “that modern wheat breeding practices may have led to an incresed exposure to these coeliac ‘trigger’ proteins. While they also identified a few modern wheat varieties that had relatively low levels of antigenic proteins… I question whether tinkering with modern wheat is really the right direction to be going in.”

Less tinkered with
I would have to agree with that. Although I can’t really entirely avoid using modern wheat as I like to made cakes and enriched breads that rely on white flours too much, and these are hard4 to replace with older wheats.

I do at least try to use older wheat varieties in my wholesome bread experiments. And while spelt may be hexaploid, it’s a lot less tinkered with than modern, industrially cultivated and processed bread wheat. Especially as I’ve been lucky enough to find an experienced organic grower so close to home in the form of Toos. Next time I see her I’ll have to ask if she’s growing any emmer or einkorn.

This wasn’t a proper recipe. I just made a sponge, or pre-ferment, with 250g of the spelt flour, the 340g of water and the 10g of yeast in the evening and left it overnight. I wasn’t planning to use any sourdough leaven, but was playing around with it in the morning, so just chucked a bit into the sponge. I then added the rest of the flour and the salt and formed a dough. Did the on-and-off easy knead thing, let it prove up, formed a ball, gave it a final prove, then baked it the hot Le Creuset (like this bread), spraying some water onto the top crust before putting the lid on, resulting in a shiny floury glaze.

It wasn’t my best loaf in terms of the crumb – it’s crumbly and a bit underbaked – but boy did it taste good. The 100% wholegrain spelt flour just had a nuttiness and depth of flavour that’s more pronounced than the breads I’ve been making recently with the Sussex Red wholegrain flour (from Barlow, a modern wheat variety). As I do long fermentations, and avoid foul industrial wheat-based products (white sliced “bread” etc), I don’t suffer from negative reactions to “antigenic gliadians” etc, but I suspect even if I did, this spelt bread would be perfectly digestible.

Footnotes
1. By which I mean selective cultivation, over many centuries, but especially accelerated since the so-called Green Revolution of the 1960s when new strains of various crops with higher yields were developed. Higher yields but, we know now, potentially higher environmental repurcussions, due to their heavy reliance on chemical fertilisers, pesticides etc. So not really very “green” in the modern, sustainability sense.

1. ‘Celiac disease: can we avert the impending epidemic in India?’

3. Hard, but not necessarily impossible. It’ll just be a lifelong challenge to revise favourite recipes etc so they work with these more earnest, properly old-school wheat varieties.