This is a technique I’ve been wanting to try for ages. Since last year, in fact, when still living in Rome. There, I encountered the blog of another ex-pat baking enthusiast, Krumkaker. She made several of her loaves in a casserole dish. It’s also a technique demonstrated by the ever-enthusiastic Vincent Talleu here.

I didn’t have my Le Creuset, or similar, with me while living in Rome, but now I’m home, I’ve found it. (Though we’ve lost a load of other baking kit in our double move. Particularly sad is the loss of an Eiffel Tower-shaped cake mould Fran bought in Paris with our dearly missed late friend Sara.)

Anyway. I’m not sure baking in a cast iron casserole, or Dutch oven, or Le Creuset, is a Scandinavian technique. It’s likely something that just evolved before Europeans had ovens, and would bake in pots, initially earthenware. 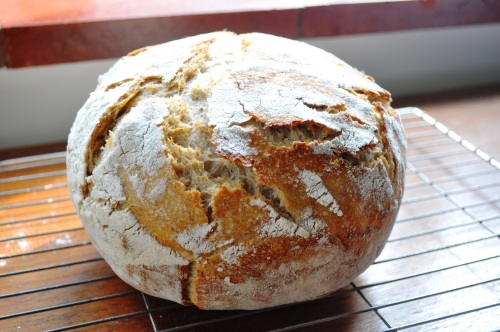 On the road
The only other time I baked in a Dutch oven was in New Zealand, 1989, when I was on the road with my old friend Stephen McGrath, his Clydesdale horses and an elaborate caravan of wagons and carts. I made an enormous, heavy-duty loaf in a massive Dutch oven, baking it in the embers of our campfire.

The logic of baking in a casserole dish is that the cast iron is not only nice and hot – you preheat it – it also traps the moisture of the dough, effectively steaming the bread as it bakes.

Steam is how you get a crisp crust on bread, and can be difficult to create in a domestic oven. Professional baking ovens have steam injectors, but domestic techniques using misting sprays or trays of water are never quite as good. I can’t remember the qualities of my campfire loaf all those years ago (25!!!), but certainly this loaf has a lovely crust – though it wasn’t the crispest I’ve managed over the years in a domestic oven.

It also has a very satisfying shape, and the dish constrains any dough flow if I hadn’t moulded the ball well enough. (I hate it when I make a round free-form loaf, forming the dough into a ball, then it flows out into a discuss shape when it take it out of the proving basket; shaping nice tight balls can be surprisingly tricky.)

Rude health
This loaf is also my first sourdough for a while. Although I’ve been making most of my own bread since we got back to England at Christmas, I’ve been neglecting my leaven somewhat.

Now about five years old, my leaven is well-travelled and much changed. It was born in London, then moved to Sussex, then it moved to Italy with us. There, it was fed on many and varied Italian flours – wheat, rye and various things referred to by the much misunderstood term farro.

Then it moved back to Britain. And I abandoned it for a few months. While we visited friends and family in the US and NZ, the sourdough lodged with my mother. Who’s a great cook, but not a bread-maker – she’s doesn’t make bread with easy yeast, let alone have any experience with sourdough.

So the past few months I’ve been nursing it back to health. I fed it rye, and local stoneground wheat flour, and filtered water. Finally I introduced some other leaven, from third generation baker Michael Hanson of The Hearth in Lewes. This could be seen as cheating, but I see it more like a kind of marriage. The yeasts and bacteria in my (puny) leaven mixing with those in Michael’s leaven. And after weeks of TLC, it’s finally back in rude health.

Mad science
As with much of my bread-making, this is kinda experimental, not a recipe as such.

I made a sponge with:
300g water
80g wholewheat leaven (at 100% hydration)
200g strong white bread flour
All mixed together, and left, covered with a shower cap – another technique I learned from Krumkaker.

I left it all day, for about seven hours, while I went off and worked in The Hearth.

In the evening, I made up a dough, with a further:
100g white bread flour
150g wholemeal wheat flour
10g salt.

In the morning, I gave it another fold, resting it at room temp for another hour, then formed a ball, rested it 10 minutes, tightened up the ball, then put it in a basked and gave it a final prove in the airing cupboard (about 24C).

I then preheated the oven to 250C, with the Le Creuset inside. After about 20 minutes, with the oven at heat, I turned the well-floured dough out of the proving basket and dropped it into the hot dish – taking care not to roast my knuckles. I didn’t slash the top –  because I wanted to see how it cracked. Or because I forgot.

The lid went back on and I baked it for about 25 minutes at 220C. I then took off the lid, dropped the temperature again to 200C, and baked for another 20 minutes or so. 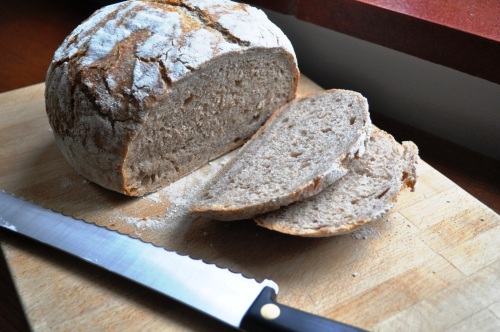 The results were good. The crust is more chewy than crisp, the crumb soft and moist. We had some for dinner, when I did wood pigeon breasts with a pancetta, thyme and juniper berry red wine sauce. We didn’t eat all the meat, so Fran used the leftovers for a sandwich for work, with a smear of wild garlic sauce. I bet no one else had that posh flavour combo sarnie* for their work lunch today.