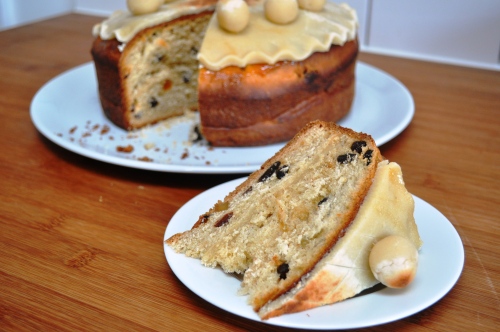 Simnel cake is the traditional British Easter cake. Or is it? Laura Mason and Catherine Brown write in The Taste of Britain that this light fruit cake with marzipan “was originally associated with a Mid-Lent Sunday when the Lenten fast was relaxed to allow the consumption of richer foods, adding variety to an otherwise monotonous diet. This was known as Mothering Sunday…. Later the holiday developed into the secular festival of Mother’s Day.”

I’m not sure it developed into, but it’s certainly been conflated with Mother’s Day, a 20th century North American celebration. Both are moveable feasts, but while the North American Mother’s Day is usually the second Sunday in May, the older Mothering Sunday is based on the date of the spring or vernal equinox and this year is on Sunday, 15 March.1

Like so many Christian feast days, Mothering Sunday, or Laetare Sunday (from the Latin “rejoice”), may have its origins in pre-Christian celebrations. At the spring equinox the ancient Greeks celebrated the mother goddess figure they called Kybelis, who originated in what is today Turkey, but who migrated across the Mediterranean to become the Romans’ Cybele, with the feast day of Hilaria2.

As they do, the traditions evolved and migrated further over history, but the “mother” aspect was retained, getting tweaked into signifying the “mother church” for Christians.

Cake, boiled and baked
The tradition of eating something called simnel cake on this feast day emerged in Medieval England. Initially it was an enriched, yeasted wheat bread. Indeed, the word simnel may derive – like the Scandinavian semlor – from the Latin simila: fine wheat flour. But no one is sure.

The early modern versions, according to Mason and Brown, were a dough enriched with fruit, almonds and spices then “enclosed in a pastry crust and… boiled before being painted with egg yolk and baked, giving a very hard exterior.” Feast Day Cookbook by Katherine Burton and Helmut Ripperger mentions such a cake was so hard it gave “rise to the story of a lady who used one for years as a footstool”.

In English Bread and Yeast Cookery, Elizabeth David writes “At one time simnel cakes were… baked with a layer of almond paste in the centre of the cake.” She they says they these were “gradually superseded by ordinary cake batters and the strip of almond paste or marzipan moved from the centre to the top of the cake, which was originally made for Mothering Sunday.” In the 19th century, servants and apprentices were allowed Mothering Sunday off to visit their families – and take a cake to their mothers.

Burton and Ripperger describe simnel cake as “a yeast cake very yellow in colour because of the saffron and candied peel it contained”. I can’t find other mentions of saffron being an essential ingredient, though I suspect it would have been included in some parts of the country, possibly where saffron was cultivated such as Stratton in Cornwall or the famously named Saffron Waldon in Essex.

Indeed, different parts of the country had their own variations, most notably the towns of Devizes (“which produced a star-shaped version without marzipan”3), Bury (“Where a rubbed-in mixture, giving a result rather like a very rich scone, was baked in a long oval”4), and Shrewsbury. This regional varation, still so common in countries like Italy, is something that was largely lost in the era of industrialisation, neutralisation and homogenisation that’s defined British food that past 70 or so years. 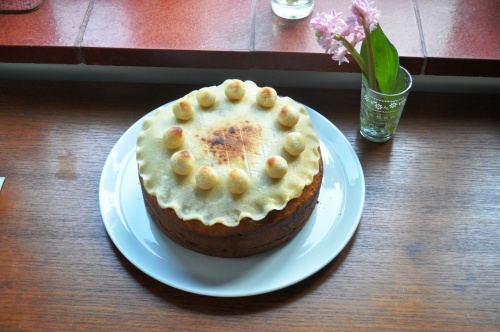 Balls not eggs
The best known form today, developed from the Shrewsbury type, is decorated not just with a coating of marzipan but with 11 balls of almond paste. These balls represented Jesus’ apostles. Sometimes there are 12 balls – to include Jesus himself. Both counts exclude the notorious Judas. I feel somewhat sorry for Judas. Some poor sod was fated to be the fall guy right? Lowest circle of hell seems a bit harsh, especially if you believe his role was predestined.

The final shift in tradition has occurred fairly recently. The cake is now largely made for Easter, and some prefer to see the balls as eggs. Easter eggs perhaps laid by the Easter bunny… Got to to love the mutability of tradition.

A hybrid recipe for a mutant tradition
This is a yeasted version. It’s a modernisation of the version in David. She based her version on one from Cassells’ Universal Cookery Book by Lizzie Heritage, published first in 1894. I wanted to incorporate both traditions of the marzipan layer in the middle and grilled marzipan balls on top.

1. First make your marzipan. You could buy some but it really is easy to make.
2. Grease a 23cm round tin, ideally springform. 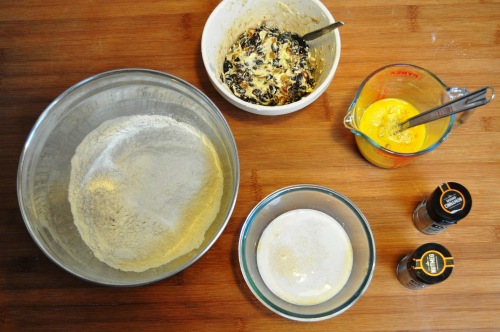 3. Warm the milk slightly, then add the yeast (if using fresh or ADY) and a dessertspoon of the sugar.
4. Allow this mix to sit or until frothy and lively. 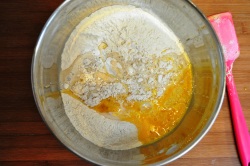 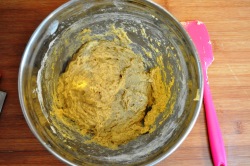 5. Add the yeast mix to the flour, along with the salt, the caster sugar, and the egg. (If you’re using instant yeast, mix it with the flour at this stage.)
6. Bring to a dough, turn out onto an oiled or lightly floured work surface and knead until well combined. It will be quite sticky5, but try to use extra flour sparingly as adding too much extra will make for a dry, dense cake.
7. Form the dough into a ball, put in a clean bowl, cover and rest for about 10 minutes.
8. Give the ball another quick knead then allow it to rest again for another 10 minutes. Repeat this once more.
9. While the dough is resting, mix together the softened butter, fruit and spices.
10. Take the dough out of the bowl and stretch it out. 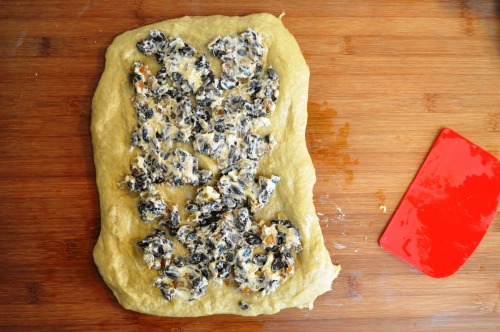 10. Smear the buttery fruit mix over the stretched out dough, then wrap the dough around and carefully knead it all together to combine. Again, it will be sticky, but try to be sparing with any extra flour. A dough scraper is your friend.
11. Form the dough into a ball again and put back in a clean bowl. 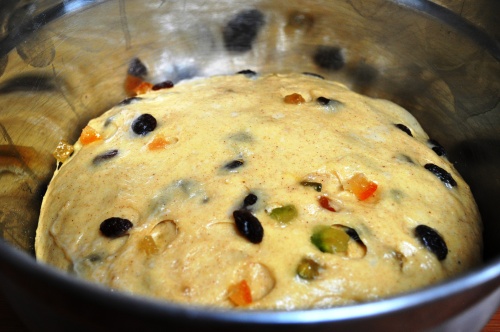 12. Cover and leave to rise, until doubled in size. 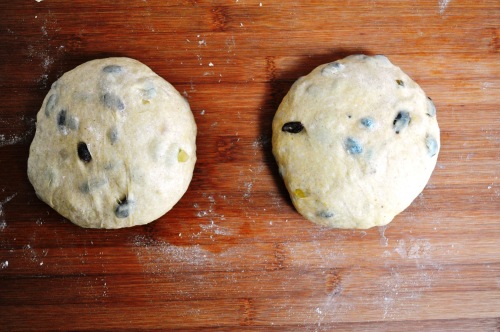 13. Take the dough out of the bowl. It should weigh about 1250g. Divide into two equal pieces, and form these into balls.
14. Leave the balls to rest for about 10 minutes, covered, then squash them down into discs. 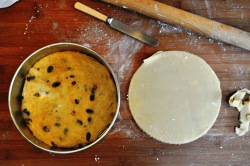 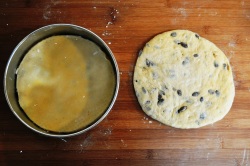 15. Put one of the discs of dough into the bottom of the tin and cover it with a disc formed of less than half of the marzipan, rolled and cut out, using the tin as a template.
16. Put the other disc of dough on top.
17. Cover and leave to rest again, until nearly doubled in size.
18. Preheat your oven to 200C.
19. Bake for about 20 minutes then turn the oven down to 180C. Continue baking for another 20-25 minutes. If the top starts to brown too much, cover it with foil. 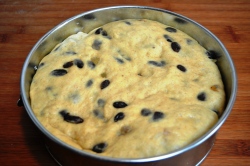 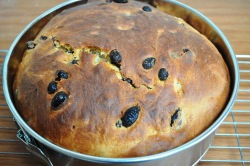 20. Remove from the oven and allow to cool in the tin for about 10 minutes, then remove and cool completely. 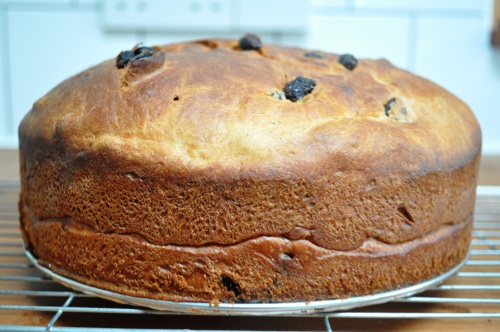 21. When cool, brush the top with warmed apricot jam. 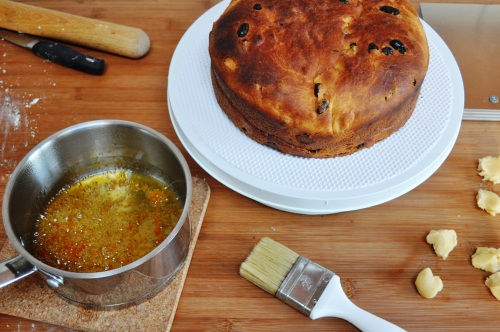 22. Roll out the marzipan, keeping a bit back, and make another disc for the top. Brush with beaten egg.
23. Use the remaining marzipan to make balls (mine weighed about 10g each), placing them in a circle on the top of the cake. Brush with more beaten egg.
24. Preheat your grill or light a blow torch, and brown the top marzipan and balls slightly.
25. Take the cake to your mother, or enjoy with friends and family, hopefully welcoming the spring with a sunny day. 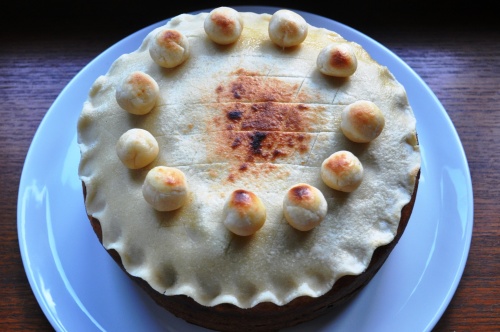 Notes
1. The Spring/vernal equinox itself, when the sun is over the equator and the lengths of day and night are roughly equal, isn’t until Friday 20 March 2015. In Western culture, its annual celebrations have been moved around between the date fixed by the ancient Romans, in the Julian calendar, then the later Gregorian Christian calendar, which most of the world uses today. Pope Gregory XIII introduced the latter because the date of Easter, which also takes it takes from the Spring equinox, was drifting and the Catholic church authorities wanted to recalibrate it. It’s quite a complicated issue, and still controversial among some Christians; read more here.
2. Hilaria means “cheerful” and relating to the modern English word “hilarious”.
3. and 4. Alan Davidson, The Oxford Companion to Food, p726 (2006 edition).
5. In terms of baker’s percentages, the 450g flour = 100%. So 180g milk = 40%. The beaten egg at 160g = 35%. So the hydration – treating the milk and egg combined as the total liquid – is 75%.