Recently, I’ve been making various Middle Eastern, Asian and Mediterranean flatbreads, or at least flattish-breads that are leavened but formed into low profile shapes. These include types of Armenian bread (peda and matnakash), naan/nan (which I’ve been experimenting with, but haven’t quite cracked; watch this space) and of course pizza bianca and pizza. So I also fancied having a go at khobz, aka khoubz, aka khubz, aka khobez (all transliterations of خبز).

Now, before anyone says “Those aren’t khobz!” or “Those don’t look like the khobz I buy from my local Arabic deli”, bear in mind that the word simply means bread in standard Arabic, it’s not one particular type of bread.

Wikipedia says it’s a synonym for pita, but that’s not quite right. Whereas pita is, generally and most commonly here in the UK, a white wheat flour flatbread with a pocket, I’ve had khobz in various forms. For our wedding, where we had a Middle Eastern-inspired feast, a Yemeni-British friend sourced a load from an Arabic bakery in west London: they were foot-wide, thin and floppy. But I’ve also had khobz that are smaller, discus-shaped, not flat breads, but in this flattish category I enjoy. This latter, I believe, may be more typical to Morocco, but having never been there I’m not sure. Rather than being made with just white wheat flour, these can contain wholemeal wheat flour and semolina.

When I was a kid, semolina was simply a slightly off-putting gruelly pudding we had for school lunches, but it more specifically refers to a coarse flour or meal made from durum wheat.

Durum wheat is Triticum durum aka Triticum turgidum subsp. durum, a cousin to common bread wheat, Triticum aestivum. It’s principally used for making pasta – and not so common in England as a sludgy pudding any more, though I’m sure it’s due for a fancy revival.

Whatever the form the khobz takes, it’s designed for eating torn and smeared with stews and dips.

Oh, and I don’t have a tannuur, or tandoor, so they’re just baked in a normal domestic oven.

1. Crumble the yeast into the water and whisk. 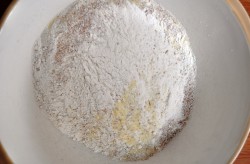 2. Combine the flours, semolina and salt in a large bowl.
3. Pour in the yeasty water and bring the mixture together to form a shaggy dough.

4. Turn out and knead to a smooth dough, or put in a mixer to achieve the same result with less elbow grease.
5. Put the ball of dough back into the large bowl, cleaned and slightly oiled. Cover with a damp cloth then leave for half an hour.
6. Take out the dough, stretch it into a rough rectangle then fold it in thirds. This is called stretch and fold, a useful technique for developing doughs. (See my pizza bianca recipe for more on the process, including photos.)
7. Put the dough back in the bowl, cover and leave for another half hour. Do one more stretch and fold, then put it back, cover and leave until doubled in size.

8. Take out the dough and weigh it. It should weight about 790g. For six small loaves, divide it into six pieces, each weighing about 130g. 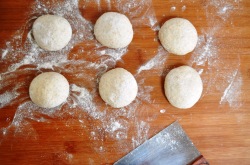 9. Form the pieces into balls, cover and rest for about 10 minutes. 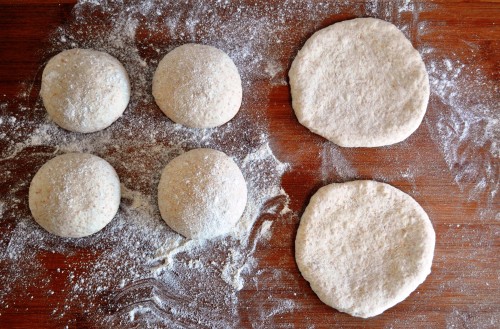 10. Sprinkle the worktop with more flour, then, using the heel of your hand, squash down the balls into discs, about 15cm in diameter. Place these on baking sheets dusted with semolina, and cover. 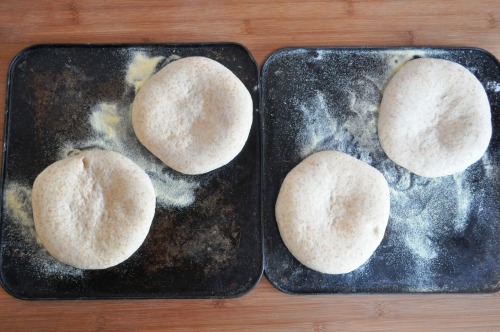 11. Leave to prove again, until doubled in size.
12. Preheat your oven to 220C.
13. Bake the loaves until slightly browned. Time will vary depending on how fierce your oven is, but at least 10 minutes and less than 20.
14. Wrap in a clean tea towel or cloth then serve, warm-ish. 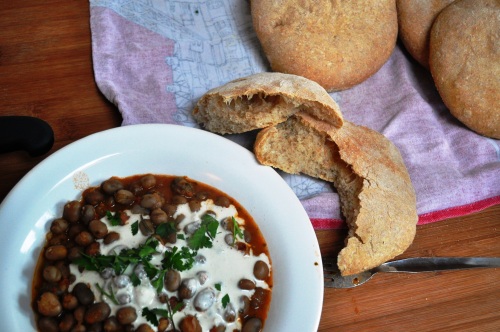 I made this batch to have with ful medames, the broad bean/fava dish that is arguably from Egypt but is found throughout much of the Levant and Arabic East Africa in various localised forms, and a lemony tahini sauce. I love beans, legumes, pulses, and I prefer to buy locally grown, or at least British produce. Sadly, a lot of the pulses we could get in Italy, just don’t grow in Britain, or the ones available in the shops are all from China. Too far, too dubious. At the moment, I’m favouring fava etc from British producer Hodmedods, and they include a regime for ful medames in one of the leaflets that comes with their pulses.

Apparently broad beans/fava – Vicia faba – have been grown in Britain since the Iron Age, that is the period of about a millennium prior to the comprehensive Roman invasion of 43AD. I love the idea of making an Arabic bread, to eat with an Egyptian stew, made with British grown broad beans, known by their Italian name.

8 responses to “A version of khobz, khubz, khoubz Arabic bread”