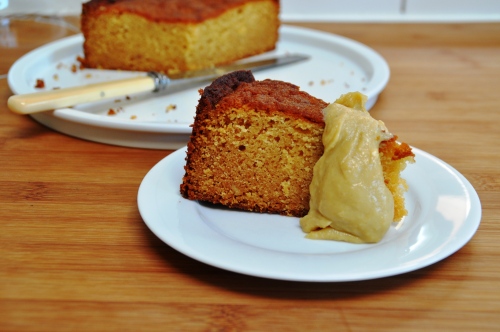 Last week, I made a batch of khobz for my friend Alex, who has started up a market stall. His operation (Kabak, named after a place he loves in Turkey) specialises in Eastern Mediterranean, Middle Eastern and North Africa inspired foods and very fine they are too. In you’re in Lewes, look out for him Friday mornings at the market.

Coming home from helping Alex break-down the stall, I got to thinking about sweets inspired by similar cuisine. The classics are baklava and suchlike pastries, as well as cakes like the syrupy basbousa/revani. But I wanted to try something new, so reached for the cookbooks.

Arabesque* by Melbourne-based Greg and Lucy Malouf is subtitled “Modern Middle Eastern Food”, which is a good way of saying it’s not trying to be slavishly traditional or authentic. I’m not sure if his sticky ginger cake relates to any specific sweet the Middle East at all, but it’s a pleasing concoction that uses both powdered and fresh ginger. I like crystallised/candied ginger, so I added some of that too, hence the name. 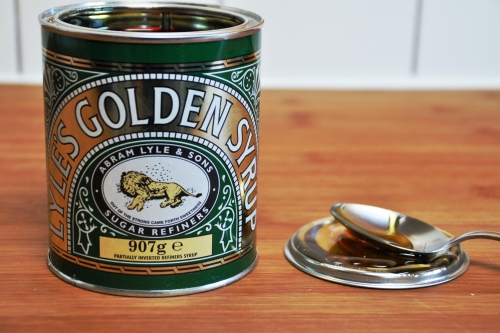 Golden age
It also uses golden syrup, arguably a quintessentially British ingredient and one I love, from a childhood of ginger biscuits and steamed syrup puddings.

It was invented in the late 19th century as a by-product of sugar refining. In Britain, we still mostly use the Lyle’s brand in the green and gold tin. The tin still bears an image of a (dead) lion and a swarm of bees, with the Biblical slogan “Out of the strong came forth sweetness”, as it did when it was first marketed in 1885. (See Judges 14 for the full peculiar, gruesome yarn.)

Lyle’s golden syrup became a popular product in early 20th century Britain. This is in large part, I suspect, as with two world wars and food shortages it was a cheaper, more available alternative to refined sugar and a sweeter, less bitter alternative to molasses and black treacle.

So golden syrup isn’t a terribly Middle Eastern ingredient, but I suspect Greg Malouf uses it as a way of emulating or echoing the stickiness many more traditional sweets from that area achieve with a syrup poured on after baking.

1. Grease and base line a 20cm tin, ideally spring-form.
2. Preheat the oven to 180C.
3. Warm together the butter and golden syrup until the former is melted then beat this with the cream or yogurt, sugar, eggs, grated ginger, crystallised ginger and lemon zest.
4. Sieve together the flours, baking powder and powdered ginger then sieve again, into the mix, and fold to combine. Try to mix in any lumps of flour but don’t beat it.
5. Pour the mixture into the prepared tin and bake for about minutes. Test to see if it’s baked with a skewer – does it come out clean? If not, return to the oven for a bit longer. If it’s starting to get too brown on top, cover with foil.
6. Remove from the oven and allow to cool in the tin, then turn onto a rack to continue cooling.

Arabesque suggests serving it with what they call ginger cream – which is really a ginger custard. It doesn’t look that appetizing in the pic, but – it’s custard! With ginger!

1. Whisk together the egg yolks and brown sugar.
2. Warm up the cream and gingers in a saucepan, and heat to scald – ie just as bubbles appear, but don’t boil.
3. Pour the cream over the egg and sugar mix, whisking.
4. Put the mixture back in the pan and continue whisking, over a low heat, until it thickens.
5. Put in a clean bowl and allow to cool.
6. When ready to serve, whisk (or indeed whip) to increase the volume a bit.

Serve with the custard. It’s also very nice with clotted cream. But then everything is.

Anyway, this was good, but when it comes to Middle Eastern and Middle Eastern-inspired baking and sweets, what I really need on my bookshelf is the new The Baking Book from Honey and Co. Hopefully it will be there soon.

* Not to be confused with Claudia Roden’s book with the same title and similar theme.