November 11 is Martinmas, the feast day of St Martin, or San Martino as he’s known in Italian. I talked about St Martin and his feast day here, and one of the related food products I mentioned was pizza di San Martino. This is a kind of enriched bread – as in Italy, “pizza” doesn’t necessarily imply a thing topped with tomato sauce and cheese. There are many variations on the theme.

Do a Google image search, and pizza di San Martino comes in several forms but they’re all basically yeasted cakes. It probably originates from the small Italian region of Molise, which reaches from the east coast into the Apennines, or possibly from the region to its north, Abruzzo. This area of central Italy, along with Umbria, has suffered recently from a series of earthquakes and aftershocks this year, so making this is one way of saying I’m thinking of friends living there, and anyone who’s lost their homes and livelihoods.

The patron saint of protection against earthquakes is actually Emygdius or Emidio, but he’s pretty obscure and I’m not aware of any baked goods associated with his feast day (5 and 18 August). I’ve adapted this pizza recipe from one found in Cooking with the Saints by Ernst Schuegraf; he doesn’t mention St Emygdius.

As I wrote in my previous piece about St Martin, a traditional pizza di San Martino would contain trinkets, favours, much like the inclusion of a silver coin in traditional British Christmas pudding or ceramic baby Jesus in galette de rois. This recipe doesn’t include any. There’s nothing to stop you adding trinkets though, for luck to whoever receives them.

1. Dissolve the yeast in the warm water.

2. Add about 150g of the strong flour, and blend to form a sponge or pre-ferment.

3. Allow the sponge to develop until it’s nice and bubbly – an hour or two, depending on warmth.

4. Put the rest of the flour and the salt in a large bowl, then pour in the sponge, milk, beaten egg and melted butter and add the sugar, raisins and zest. I used orange and lemon zest.

5. Mix to combine. It’ll be a fairly sticky dough. With just the water and milk, it’s about 67% hydration, but factor in the eggs and melted better too and that’s a fairly high proportion of liquid to flour.

6. Turn out onto an oiled worktop and bring to a dough. For tips on how to handle sticky doughs, read my notes here.
7. Return to the bowl, cleaned and oiled, then cover and leave to prove until doubled in size.
8. Butter a round cake cake tin, ideally 26cm,  or even larger. (If you don’t have one, you could bake the pizza freeform, shaped like a disc, on a baking sheet.)
9. Turn out the dough and form into a ball. Push the ball down into the cake tin, then cover and leave to prove again.
10. Preheat the oven to 200C.

11. When the dough is nicely risen, put it in the oven.
12. Bake for about 40 minutes. If it’s browning too much, cover with foil or turn down the oven. 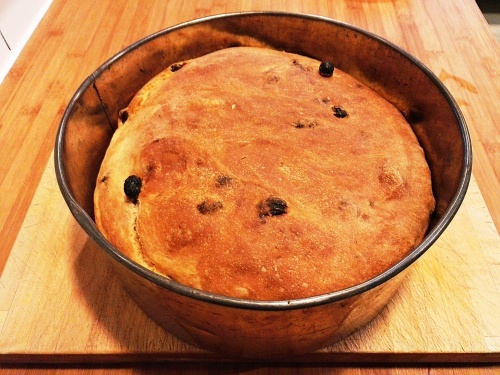 It’s not unlike a kind of brioche, so eat for breakfast, or morning coffee, or with tea. If I’m honest, I’ve no idea how an Italian family would eat it. During my time in Italy I never really managed to inveigle myself into households to watch people eating Easter Colomba or Christmas panettone or other enriched feast day breads like this. So any central Italians reading, please do let me know.