My copy of the Roux Brothers on Patisserie is inscribed as a gift from my parents for Christmas 1995. They posted it out to me in New Zealand, where I enjoyed an antipodean summer Christmas. As summer gave way to Autumn, we began the Old Man Mountain apple harvest. In was in that orchard that I got, aged 24, my first ever bee sting. It descended liked a Stuka and stung me just below the eye.

I made a lot of French apple tart that Autumn. Mostly successfully, until the one time when I was helping my host, mentor and friend Nadia with a catering job. I made three or four in large trays, but failed miserably to get the liquid for the glaze to setting point. I’m still ashamed of that cock-up. Nadia wasn’t happy with me. I still love the Roux French apple tart, too. Though these days I’m possibly more keen on Canterbury tart.

We’ve lost so much of our culinary tradition in this country. I’ve said it before, but the combination of urbanisation, two world wars, the industrialisation of farming practices and the rise of the supermarket homogenised much of our food. Furthermore, we have a long history of food fashions and fads, such as royals employing French chefs. More recently, thanks to the work of food writers and immigrants, we’ve embraced Indian subcontinent and Italian-inspired food to the point where most families eat pasta more than they eat traditional British stodge, for example. We probably do. I’m not sure what I’d do without pasta to fill up T-rex most lunchtimes.

It shouldn’t need saying, but British food can often rival anything from our continental neighbours. We had our Dutch friend Annely visiting this weekend, and as she loves cheese treated ourselves to some pricy local fare. One was Lord of the Hundreds, a sheep’s milk cheese as good as any Sardinian or central Italian pecorino. Another was Lord London, a soft cows’ milk cheese as good as any French brie.

So when you discover a recipe like Canterbury tart, it’s worth noting that it’s as good as if not better than a classic French apple tart, and more straight-forward to make too. Now, I’m loathe to say Canterbury tart is an old, traditional Kent recipe as I can’t find much information about it. Several websites cut and past the same blurb saying the first recorded recipe was written by Geoffrey Chaucer in 1381 but I’m doubtful. Kent is certainly the heartland of apple growing, so let’s say it likely has some history. I got the recipe from my mum. Googling, it looks like one from Mary Berry. I wish Berry had told us where she got it from but her recipes are somewhat lacking in preamble.

A 25cm (or thereabouts) flan tin

1. First make the pastry. If making by hand, rub the butter into the flour and icing sugar until the mixture resembles breadcrumbs, then stir in the beaten egg and bring together to form a dough.
2. If making the pastry in a processor, combine the flour, butter and icing sugar in the bowl then add the egg and mix until the dough starts to form.
3. Form the pastry into a smooth ball, wrap in plastic and chill in the fridge for at least 30 minutes.
4. Roll out the pastry and line the flan tin, leaving an overhang. Chill the tin for a further 30 minutes (or longer if you need to).
5. To make the filling, beat the eggs, caster sugar, lemon rind and juice together in a mixing bowl. Stir in the warm melted butter, then coarsely grate the cooking apples directly into the mixture. Mix well.
6. Have the dessert apples ready sliced.
7. Preheat the oven to 200C, putting t a heavy baking tray in to heat up. (You don’t bake the pastry case blind, so this will help cook the bottom.)
8. Remove the pastry case from the fridge and spread the runny mixture in the bottom. Level the surface and arrange the dessert apple slices on top, neatly overlapping.
9. Sprinkle with Demerara sugar.
10. Put in the oven and bake for about 40-50 minutes, until the centre feels firm and the apples slices are slightly browned.

Serve warm, with cream or ice cream obviously. Though I would say I prefer it when it’s cooled and firmed up more. Even after a night in the fridge. Yum. The citrus/apple combination works so well.

By the way, I’m aware my pastry looks a bit messy. Although I can be somewhat perfectionist in some areas, I’m long reconciled with my shortcomings as a pastry chef. The important thing here is that it tasted good. 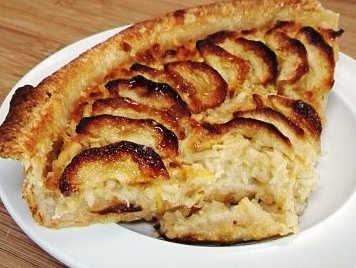