For those not familiar, a tarte tatin is the pastry equivalent of an upside-down cake. Fruit is caramelised in butter and sugar, topped with pastry, baked, then inverted to serve. It’s a format that is forever associated with Stéphanie and Caroline Tatin, the Demoiselles Tatin. These sisters ran a hotel in France in the late 19th century and the story goes that Stéphanie accidentally invented the tart when she cocked-up making a traditional apple tart one day.

It’s probably hokum, and such a pastry format may have existed beforehand, but an inverted, caramelised apple tart became the signature dish of the Hôtel Tatin.

These days, there are numerous variations on the theme. I’ve done savoury versions using onion and beetroot. But my mainstay became a pear version, thanks to the fact that in our old house we had a prolific pear tree. I planted a pear tree in our garden when we moved here to Lewes about 10 years ago. I pruned it a few years ago, and it had a year off fruiting last year, but this year it had 30-plus healthy pears, despite only being an unsubstantial thing less than two metres call. A good height for my seven year old to help with the picking.

You can make a tarte tatin with shortcrust or puff pastry, but I prefer the former, especially when it’s made with the addition of ground almonds.

I think I could have packed more fruit into this version, and it’s not exactly elegant. But frankly, it’s delicious – butter, sugar, caramelised fruit. So good. My pastry skills are basic, but when you tuck the pastry in and it bakes, it creates possibly the best bit of the whole concoction – thick bits of pastry coated in caramel.

You will also need an ovenproof pan or skillet. I use a cast iron skillet 26cm in diameter.

1. First, make the pastry. This is very easy in a food processor. Put the flour, ground almonds and sugar in the bowl the whiz briefly to combine. Add the butter and whiz until it looks like breadcrumbs. Add the beaten egg, then a little water. Not too much. Just enough to create a firm dough. If you don’t have a food processor, rub the butter into the flour until it resembles crumbs then stir in the sugar and ground almonds. Bring to a dough with the egg and a little water, if necessary.
2. Wrap the pastry and leave in the fridge until you’re ready to use it.
3. For the filling, slice the butter thinly and arrange on the bottom of the pan. 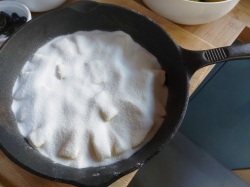 4. Sprinkle the caster sugar in a layer over the butter.
5. Peel, half and core the pears. I used a melon baller to core them, but you can use a teaspoon if you don’t have one.
6. Put the pear halves in the pan, core side down, rounded side up.
7. Put the pan on a medium heat and cook, melting together the butter and sugar, which will then start to caramelise.

8. Meanwhile, heat your oven to 220C.
9. When the butter/sugar mix is starting to caramelise, roll out the pastry to a rough circle a little larger than the diameter of the pan. Timing this is tricky, and I think I took mine off the heat a little early. You don’t want to burn the caramel, but you want your fruit nicely tinged.
10. Remove the pan from the heat and allow the bubbling to subside slightly before covering the fruit mix with the pastry.
11. Tuck the edges of the pastry into the pan and prick all over with a fork. 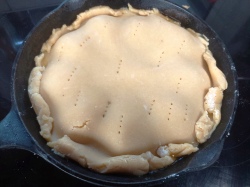 12. Put in the oven to bake for around 20 minutes or until the pastry is nicely browned.
13. Take out of the oven and allow to cool a little.
14. This is the tricky bit. Run a knife around the edges of the tart then invert it onto a large plate. Some of the fruit may well stick, so just carefully ease it out of the pan and put it back in its slot in the pastry.
15. Serve warm or at room temperature, with a blob of thick cream or vanilla ice cream. Try not to agonise about the calories or cholesterol.

Oh, and although this was delicious, I think I could have packed more pears in. You can also put the fruit the other way up, so you have the rounded bits upwards when you turn it out. The Roux Brothers do it that way with apples in their classic Roux Brothers on Patisserie. Prue Leith and Caroline Waldegrave, meanwhile, in Leith’s Book of Baking, do thick slices of apple. An image search online shows many variables. Frankly, such arrangements are up to you. All delicious and indulgent.