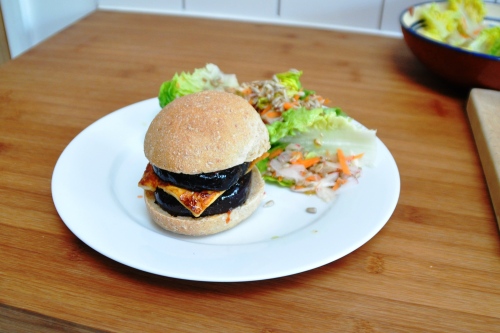 Back in the old days, I’m sure we always ate burgers with a sesame bun. It wasn’t exactly the greatest bread, but at least it was savoury. These days, all the hip and wannabe burger joints sell theirs in brioche buns. I do not get this at all. Brioche is a sweet breakfast bread.* I don’t want a sweet burger bun, it’s just plain weird.

I was a vegetarian or pescatarian for about 20 years and although I’m more omnivorous these days I still don’t eat much red meat; in fact, I reckon I’ve only eaten beef about three times in the last 30 years, in part as I’m not a huge fan, in part as, in much mainstream modern industrial farming, beef can be reared in grim and environmentally unsustainable ways*. So meat burgers aren’t really my thing. But I do love the format, so when I saw this veggie option on Hermione’s Pantry for burgers with aubergine (eggplant, melanza) and halloumi – one of my desert island foodstuffs – I had to try it. 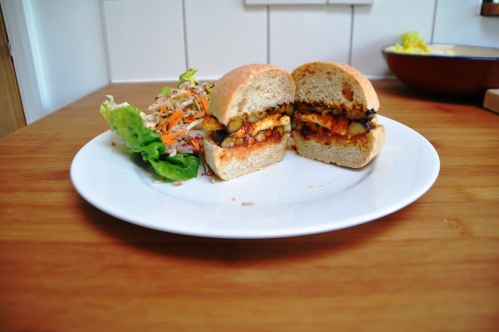 A month or so ago, I did a version of the khobz, an Arabic bread made with semolina and wholemeal wheat flour. I’ve been enjoying playing around with the recipe. I thought why not try the same dough for burger buns. I divided the same quantity of dough from my khobz recipe into eight and rather than making flatter, disc-shaped loaves, made balls for burger buns. I then used them for this aubergine and halloumi burger. I tweaked Hermione’s marinade and left it much longer than she says, but the result was great, with a juiciness that’s often lacking from veggie burgers and the khobz dough making for a good, suitably savoury, bun.

The khobz recipe involves a very satisfying combination of flours, and has also proved itself suitable for large, tear-and-share breads. Rather than dividing the dough into six for small loaves, I divided it in two and made these for a meal with friends a few weeks ago: 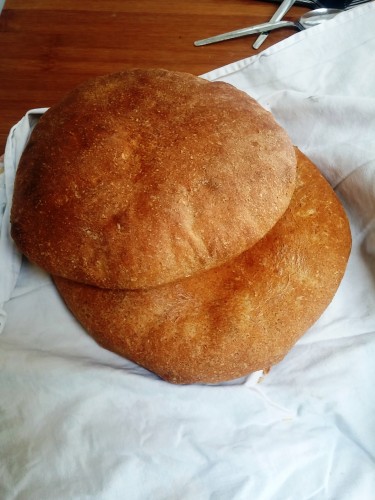 * Just read up on concentrated animal feedlots (CAFOs), deeply messed-up arrangements involving cattle being crammed into fenced pens, with no grazing, and instead a diet of maize – something they’ve not evolved to eat. They stand around in their own excrement and get sick, necessitating intensive regimes of antibiotics. CAFOs, or at least similarly brutal intense operations, are creeping into Britain and, likely, will become increasingly common as countries like China become wealthier and more of the world’s seven billion start shifting to more heavily meat-based diets.

Although it’s a US-oriented book by California-based writer Michael Pollen, I’d recommend anyone, even in Britain, read The Omnivore’s Dilemma.  It not only looks at meat (and, by extension, cheese) production in the food supply chain, it even evaluates the virtues, or otherwise, or locavorism, something that’s close to my heart but also something I’m happy to question and be further educated about.

In the meantime, I prefer my bovine products to come from cattle like this. Except for the one beast that isn’t a cow, but instead seems to be a fallow deer that has adopted the herd! 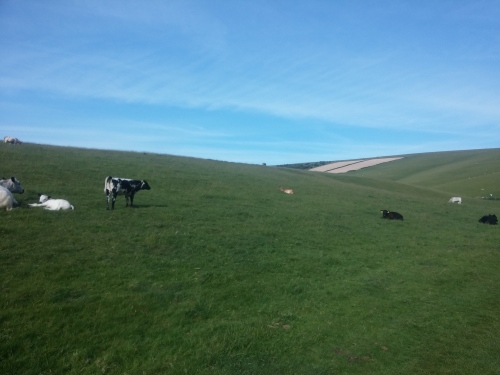 * Except when it’s not. I’ve got a few recipes for savoury brioche, eg the cheesy brioche de gannat.