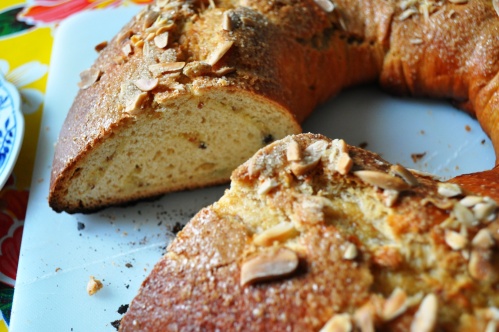 Most Christmases I like to try a different type of seasonal cake. Anything but a British Christmas cake. Yuck. So in the past I’ve done stollen, and a few years ago a panettone (scroll down a bit on this page). This year, despite being in Italy, I’ve made a kringle, from a recipe I found in an in-flight magazine.

The recipe is from Norwegian-raised, London-based Signe Johansen. She doesn’t give much pre-amble, but says “Kringle gets its name from the Old Norse for a ring, and is eaten across Scandinavia during the festive period.”

As with the Italian ciambella though, the name kringle seems to cover a broad variety of baked goods, ranging from things that resemble a pretzel, to various ring-shaped cakes, and even ring-shaped variants make with flaky pastry. It looks like something that’s doesn’t just vary throughout Scandinavia, but also varies extensively across the Scandinavian diaspora, notably in the US.

This version is an enriched yeasted dough and much more like stollen (especially as it also has a marzipan filling) or panettone than the strudel-like versions in the above link. It’s also made with white spelt flour (farina di farro bianco in Italian). As much as I like to eschew using too much modern wheat, I’m not sure about this and if I did it again, I might be tempted to use half-half plain and strong white flours.

Anyway, I’ve no idea how authentic it is, whether it resembles a particular kringle from a particular nation or location, or whether it’s a total mongrel. It’s just a pleasing bit of seasonal baking, with a rich dough, plenty of almonds and a delightful touch of cardamon. 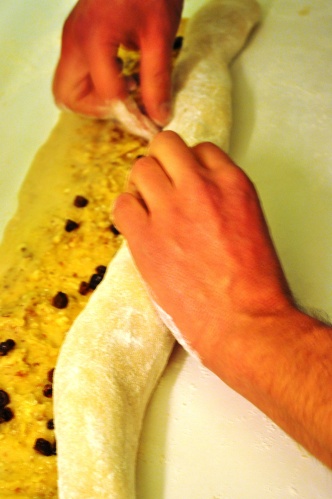 1 Warm the milk and butter. Scald them, take off the heat and allow to cool.
2 Mix the flour, caster sugar, cardamom and salt together in a large bowl.
3 When the milk and butter have cooled to around 28C, crumble in the yeast.
4 Leave the milk and yeast for a few minutes, then add one beaten egg.
5 Pour the liquid into the flour and beat to combine. Beat until it starts to come together as a dough. You could use a food processor or mixer with a dough hook. She doesn’t seem to knead it at all.
6 Form the dough into a ball then leave to prove in a large, clean bowl, covered with cling film.
7 Turn around and ready your food processor.
8 To make the filling, blitz together the marzipan/mandelmasse, almonds, butter, vanilla, one more beaten egg, salt. You want a rough paste.
9 Add caster sugar to taste to the filling – 30-45g or so.
10 When the dough has doubled in size, take it out of the bowl and put on a lightly floured work surface.
11 Stretch and roll the dough out into a rectangle 60x15cm.
12 Spread the filling on the dough.
13 Starting from a long edge, roll the dough up.
14 Dampen the other long edge to seal the cylinder.
15 From the cylinder into a ring shape, pinching the ends together. (I’m not entirely sure how this works; it felt a bit bodgy to me.)
16 Preheat the oven to 200C.
17 Transfer the ring to a large baking sheet, lined with parchment.
18 Cover the dough and leave to prove again, until roughly doubled in size. She says “If it has proved enough, the indentation should stay after a gentle poke.” Which is nice.
19 When it is ready to bake, glaze with egg, and sprinkle with flaked almonds and Demerara sugar. I had some egg whites so used them. I also didn’t have any flaked almonds, so just sliced some blanched almonds. And I used granulated sugar instead or Demerara.
20 Bake for around 40 minutes, then cool on a rack. 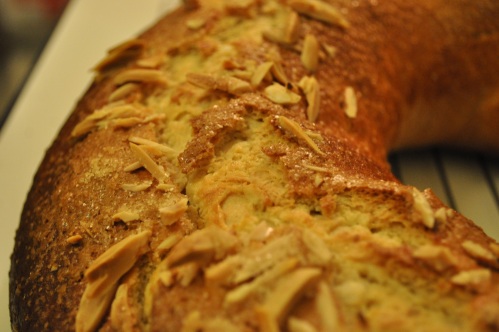 My blasted oven has fierce bottom heat, so despite triple-traying it, I still got a slightly burnt bottom. Otherwise, it was jolly good when we had it for breakfast this morning. The recipe says serve “on the day of baking”, but with a dough that’s so rich in fats and sugar I’m sure it’ll last happily for a several days.

* Marzipan tweaked a bit to become more like mandelmasse

Mix the sugars and almonds.
Add the egg, lemon and vanilla.
Blend with a knife then knead briefly.
Wrap with cling film and store in a cool place.
It’ll keep fine for a few days, if not more.