Here’s another traditional Sussex product that doesn’t really seem to exist any longer. Much like the Sussex plum heavies I did a month ago I’ve never seen the superbly named Lardy Johns in bakeries, and there’s very little information about them online. Also much like plum heavies they sit on the fruit pastry-scone spectrum and utilise that more old-fashioned baking fat: lard.

This recipe is from ‘Sussex Recipe Book With a few excursions into Kent’, a collection of traditional recipes by Margaret Samuelson, published in 1937. Some are her own or her family, many are gathered from interviews, while others are from 18th and 19th century sources.

The book doesn’t provide the source for the Lardy Johns recipe, which is given in the following wonderfully abrupt format: “Quarter pound flour, 2oz lard, 3/4 teaspoonful baking powder, 2 teaspoons sugar and a sprinkling of currants. Rub all together in your hands, and add enough water to make a stiff paste. Cut the paste into squares and bake for about 10 minutes.”

1. Sieve together the flour and baking powder.
2. Cut the lard into small pieces and rub into the flour.
3. Add the sugar. I used granulated, but caster would be fine while Demerara or other brown sugar would give a slightly richer flavour.
4. Add the currants.

7. Cut into squares of about 50mm (2 inches). This recipe produced six, so if you want more double it.
8. Bake in an oven preheated to 200C for about 10 minutes, until lightly browned. 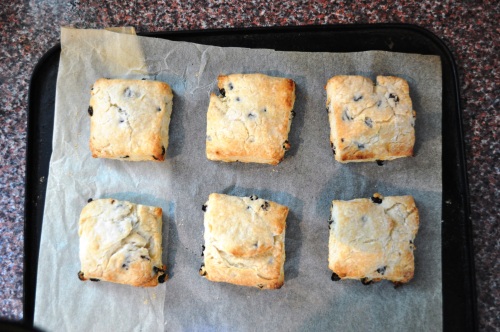 9. Eat warm, or let them cool, split and eat like scones (skohn, skon) with jam.

These really are very basic. Ten minute jobs. Simple fare from an era before fancy fats and flavourings. But they are surprisingly good. Slightly sweet, with a texture that’s light, slightly crisp and shorter than you’d get with a crumblier scone, which is likely made with butter and/or buttermilk.

And discuss
In ‘English Bread and Yeast Cookery’, Elizabeth David says, “If you cannot lay hands on pure pork lard, don’t attempt lardy cakes.” Well, I’m not sure of the purity of the stuff I’m use. It’s certainly not pure in a moral sense, being a product of the heinous industrial meat industry, something I try as much as possible not to engage with. But as I said in the heavies post, it seems almost impossible to source lard of good provenance. I’ve asked one of the meat purveyors on our local farmers’ market if she could do me some lard, so hopefully that’ll come through.

My vegetarian younger self 10 or 20 years ago would be horrified, but I’m enjoying these lard baking experiments – never mind the fact that products like these are a big part of the English culinary heritage. David suggests lardy cakes were traditionally made when people didn’t have their own stove and would bulk bake once a week. She explains, “… all the lardy cakes, the yeast dumplings, the buns and small cakes … were made from any extra dough not used for bead.” She goes on to say, “For these lovely cakes and rolls, lard is essential to achieve the proper texture, richness and weight. There is no such thing as a really light lardy cake.”

This suggests the Lardy Johns recipe from Samuelson is fairly modern,  developed from the yeast dough recipes with the advent of baking powder – a 19th century invention. Interestingly, the more common surviving members of the English lardy cake family are yeasted. Central and southern English counties like Hampshire and Wiltshire are associated with lardy cake, and the Wikipedia entry says lardy cake is found in “in several southern counties of England”. David, however, also gives a recipe for a Northumbrian version that neatly defenestrates that anonymous Wikipedia contributor’s theory.

I would hazard that lard, and a bit of sugar, and a few currants, when combined with a basic dough, would have been used by poorer folk throughout Britain to make a treat through from the early modern era to the mid-20th century, when intensification of farming made butter more cheaply available. They’re modest treats, sure, but compared to the absurdity of the cupcake, and suchlike contemporary middle-class obsessions, they have an assertive honesty and simplicity.