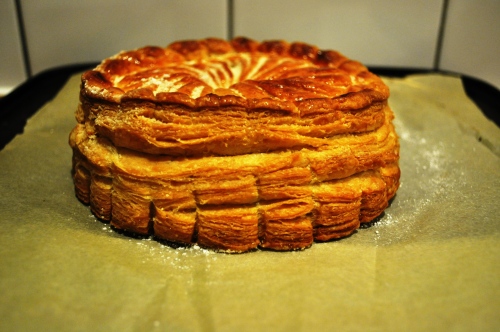 In my last post about galette des rois, I mentioned that this French Epiphany pie is basically a form of Pithivier. These are puff pastry pies that may well originate in the town of Pithiviers in central France. Indeed, in French the pies are known as Pithiviers, but us foreigners lop off the final s. Don’t ask me why.

I also wasn’t happy with how I’d bodged the edge of my galettes des rois, crimping it like a pasty rather than leaving it free to expand. So I was determined to finish this one more neatly.

Traditionally both the galette des rois and Pithiviers have a kind of scalloped edge, like the petals of flower petals. This can be achieved by using a semi-circular cutting edge, for larger scallops, or by simply cutting into the edge slightly with the blade of a knife, or indeed the back of the blade of a knife, which is what I did.

So, as with the galettes des rois, I rolled out some puff pastry (about 300g in this case), and cut two discs (in this case I used a 16cm diameter side plate). I then put the frangipane in the middle of the bottom disc, leaving a rim of about 25mm, which I brushed with egg wash. I then put the top disc on, and pushed it down firmly to seal. 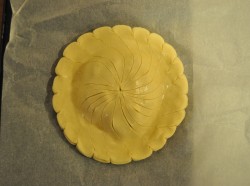 I then egg-washed the whole thing, scalloped the edge as described above and cut curved lines in the top, radiating out from the centre. I baked it at 200C for about 25 minutes. After baking, I dusted it with icing sugar and put it under a hot grill to caramelise slightly (top pic, above).

In this case, the edge puffed up very satisfactorily.

My next post will be all about my puff pastry experiments. I’ve been obsessing slightly as you may be able to tell if you follow my Instagram…