Back again and more brioche 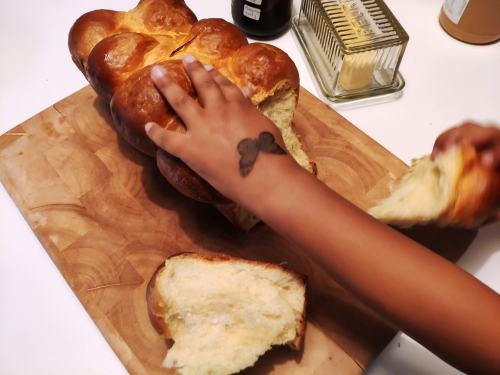 That was a long hiatus. The past few years have been quite intense on the parenting front, and the blog was a victim. Last month we underwent a significant transition though – our younger one started school. So now I have a bit more time and headspace to get this blog going again.

One thing I have been doing the past few years is making brioche. We all love brioche in our family. As much as I like to support my friend Einat’s Mamoosh bakery, with its top quality pittas and brioche, I enjoy making our own. It’s cheaper too, obviously, and times is tough financially for us normal families as the years of moronic, shambolic Brexit suicide drag on. Never mind how the climate crisis is going to affect food supplies and costs.

All and sundry
Anyway, as I mentioned in a post back in 2016, when I started my brioche experiments I found more than 20 recipes in my cookbooks and notepads. I hadn’t realised quite how much variation there was. The Art of French Baking by Ginette Mathiot in its 2011 might have unreliable recipes but it’s good for highlighting the differing types, with the quantities of egg, butter, milk and all the things that enrich the dough varying enormously. After trying several Mathiot ones, I’ve tried, among others, the Roux brothers, Prue Leith and Caroline Waldegrave, Dan Lepard, Justin Gellatly, Andrew Whitney, Paul Hollywood, and one from the National Bakery School, an alma mater. The one I ended up preferring came from River Cottage Handbook No 3 by Dan Stevens.

One thing they have in common is that the dough is sticky and fatty from all the butter and as such can be messy to process with warm human hands. To bypass the sticky kneads, I simply mixed it with a spatula then left it in the fridge for a few hours, then kneaded again when the butter had firmed up.

Finally, a mixer
Something else makes made it all a lot easier though – the acquisition of a mixer. I’ve wanted one for years, but the classic KitchenAids and Kenwoods you see on Bake Off are beyond our means at £250 to £500. I’d seen one a lot cheaper in Aldi, which was originally £100 I believe then came down to £50. Which is great price-wise, but what of its quality? If it’s so poor that it lasts only a tenth of the time a £300 one does, it’s a false economy.

Then suddenly, there in the offers aisle, was an Aldi Ambiano mixer, the last one, for just £20. Which I couldn’t refuse. Now, it’s clearly not as robust as the big brands, it’s a bit noisy, and the attachments don’t do a great job of reaching the sides of the bowl. But it’s not bad, and has transformed my relationship with brioche dough.

Saturday night and Sunday morning
My goal was to come up with a recipe I could do during the day on a Saturday, bake in the evening, then have for Sunday breakfast, as Sunday is “Jam day” in our house, when the kids are allowed sugary spreads. With a few tweaks the Daniel Stevens one works well in that time – start Saturday morning, bake in the evening. You can even leave the dough in the fridge for longer to fit in with your day’s activities.

As for the flour: usually I make breads with Stoates, which is organic and stroneground – which is great nutritionally thanks to the higher content of bran and germ, but has given a greyer, crumblier result to some of the brioche. So now I’m using whiter, more industrial, more finely bolted strong white from the supermarket.

Method
1. Stir the sugar into the warmed milk then sprinkle on the yeast and leave it to froth up.
2. In the bowl of a mixer, combine the flour and salt.
3. Pour in the frothy yeast mix, add the beaten egg and soft butter, then mix on a slow speed until well combined. Alternatively, mix all the ingredients in a bowl and combine by hand with a silicone spatula. With both approaches, make sure to scrape down the sides of the bowl so everything is combined.
4. Cover the bowl and put in the fridge for a few hours to firm up the butter.
5. Turn out of the bowl onto an lightly oiled worktop and give a it a bit of a knead by hand, forming a nice neat ball.
6. Put the bowl in a clean, oiled bowl, then cover and leave to prove at around 18C. It doesn’t need a warm place, as you want a nice long fermentation time.
7. When it’s doubled in size, remove from the bowl and decide how you want to shape it.
8. Sometime I use classic fluted, tapering brioche moulds, sometimes I form a long snake then twist it before putting it in a loaf tin, but this time I went for the tear and share approach. The total dough weight is about 820g, which I divided into 10 pieces at 82g each. You could do more, for smaller tearing pieces – say 14 at about 58g each. Form these pieces into balls, leave them to rest, covered, for 10 minutes, then put them in a long loaf tin. I use one that’s 29cm long, 10cm wide, 7cm deep.
9. Cover the tin with a cloth then leave for a final prove. Timing will depend on the air temperature, but leave until nice and swollen.
10. Preheat the oven to 200C.
11. You can glaze the loaf with some egg, or a mix of egg and milk, but frankly it’ll get wolfed even if you don’t.

12. Bake for 10 minutes then turn the oven down to 180C and continue baking for about 30 minutes. Make sure you don’t have an oven shelf above it, as it rises quite a lot when it the yeast experiences the oven heat (this is called the oven spring). 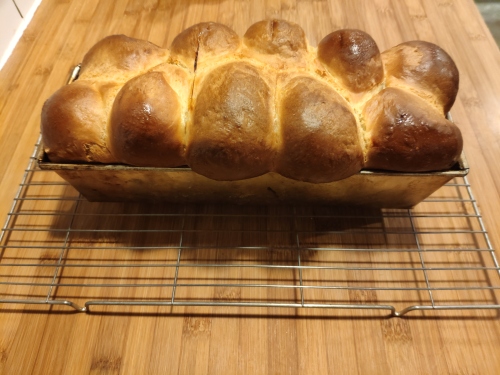 13. Turn out onto a wire rack to cool.
14. Wrap it in a cloth or put in a cloth bread bag until you’re ready to eat it.
15. Serve with jam and butter. (Though my kids demand honey.) 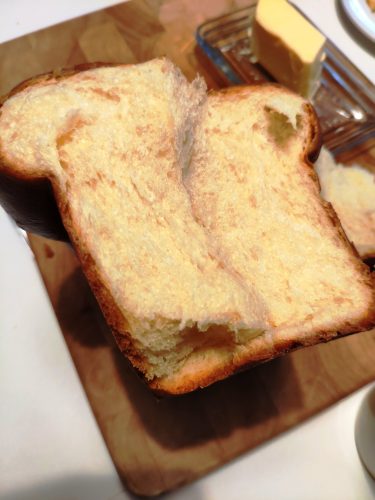 * During the 2020 lockdown, when everyone got into baking and flour became scarce, I managed to score a sack of T55 flour. This is a French flour, equivalent to Italian type ‘0’. Although the wholesaler I bought it from listed it as “Strong Bread Flour”, it’s actually low protein – 9.8%, which is around the same as or even lower than many plain/all-purpose flours. I’ve been using it to make brioche and it’s worked well.

8 responses to “Back again and more brioche”