The sheer indulgent excess that is monkey bread 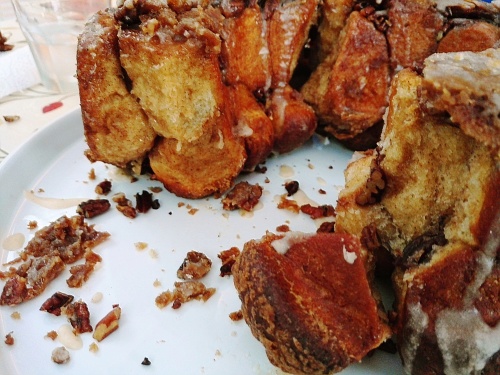 In my time as a baker and sugar addict, I’ve made or consumed a vast number of rich concoctions and enriched doughs, from multinational doughnut variations to chocolate babkas. But nothing was quite as indulgent as monkey bread, something I’d not heard of until a few weeks back when a recipe by Jane Hornby popped up in a BBC Good Food newsletter.

Monkey bread is basically made with an enriched dough, with balls or chunks dipped in more butter, sugar and spices, and arranged in a ring shaped tin for baking. It is a kind of sticky, cinnamony, buttery, pull-apart, tear-and-share bread that clearly has its origins in traditional sweet, spiced buns and breads of Germany, Scandinavia, the Netherlands, and even Britain (eg the Chelsea bun). Those traditions crossed the Atlantic with migrants who settled in America, where they changed, evolved – and had gallons of butter and tons of sugar thrown at them.

The oldest print version of monkey bread is from 1945, and by ZaSu Pitts1, an American actress with a career that spanned the silent and early sound eras. While much of Europe was suffering from rationing, American was producing monkey bread. Goshy.

No one knows where it gets its name, but it’s either because it supposedly resembles the monkey puzzle tree, or because it’s like something monkeys would get in a frenzy over pulling apart. The latter seems more likely to me, as we – four adults, four little monkeys (aged 1 to 11) – ate it together, falling on it with simian fervour.

There are savoury versions or versions with dried fruit, but this one is based on Hornby’s – cinnamon, sugar, butter, some roasted pecans – and it seems closer to the classic US type. My bundt tin wasn’t quite big enough, the whole thing was absurd, and I can’t really imagine being able to justify making it too often, but it’s a pretty awesome thing to have in one’s repertoire.

Method
1. You need a bundt pan or similar ring-shaped tin, ideally 30cm in diameter.
2. To make the dough, first melt the butter and warm the milk slightly. I did this in a microwave. Stir in the caster sugar, scatter in the yeast, and leave it a few minutes to get going.
3. Put the flour and salt in a large bowl, then pour in the yeast mix. Of course, you can do this in a mixer. If you have a mixer, combine and mix and skip to 8.
4. Beat the eggs together then pour in too.
5. Bring together to form a sticky dough.
6. Turn out and knead to combine and homogenise.
7. Form a ball, then leave to rest again, covered, for another ten minutes.
8. Give it another knead, then cover and rest again. Repeat this once or twice more until you have a nice smooth dough.
9. In a clean, lightly oiled bowl, cover and leave to rest again, until the dough has doubled in size.
10. Prepare the bundt tin by melting the 125g of butter then using some of it to brush the inside of the tin.
11. Mix the sugar and spices, then sprinkle some of this into the buttered tin. Add a handful of the roasted, chopped pecans.
12. When the dough has proved, you need to divide it into pieces. Hornby’s recipe said 65, I went for 50 as that seemed a tad excessive. The total dough weighed about 1060g, so I divided it into pieces each weighing about 21g. 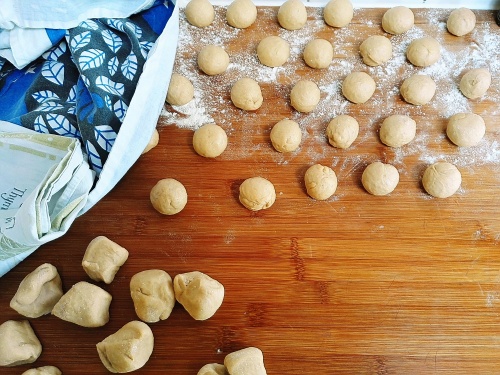 13. Roll these into balls. You don’t really need to, but I fancied it, just cos, to maintain the technique, which involves cupping your hand over them, and rolling them on a lightly oiled worktop. If you get proficient, you can do one in each hand. Ta da.
14. Leave the balls under a cloth as you work so they don’t dry out.
15. Put the rest of the melted butter in a flat-bottomed bowl or container, and the rest of the sugar and spice mix in another.

16. Roll the balls, in batches, in the butter, shake off any excess, then roll them in the sugar and spice mix. Place them in the tin.
17. Form a layer, sprinkle with more pecans, and keep going until the tin is full and balls all used up.

18. Cover again, then leave to prove one last time, until bulging and springy to the touch. Push a finger in and the dough should slowly re-expand.

19. Heat the oven to 180C, then bake the bread for about 40 minutes. Turn the oven down a bit, or cover with foil, if it’s over-browning before this time.

20. Leave to cool in the tin, then turn out when still warm but not hot.
21. Whisk together the ingredients for the icing then drizzle over.
22. Eat with for breakfast, with a morning coffee, as afternoon tea, or even as a dessert – which is what we did.

Footnotes
1. More about her here. Her recipe, and more about monkey bread, can be found here.
2. I find these sugars behave pretty similarly in baking, though muscovado sugars were originally those of lower quality, and have higher molasses content.