Pistachio-cinnamon pastries and memories of Nadia 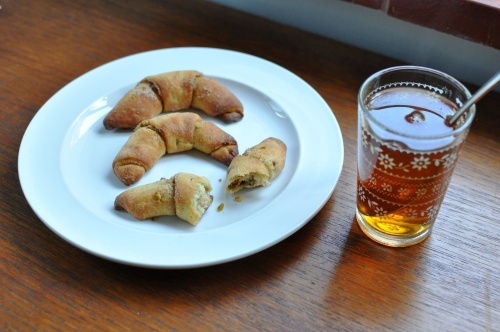 This time last year, my wonderful old friend Nadia was hospitalised. A few days later she died, surrounded by her family. It was her birthday too, so the end of October is double memorial to Nadia. She is much-missed and I think of her often, especially when I’m cooking.

I lived with Nadia and her family in the mid-1990s, in a kind of long-term WWOOFer role on a farm called Old Man Mountain in the verdant, wild Buller Gorge on New Zealand’s South Island. Although I worked on the farm for its owner, Susie, I spent a lot of time with Nadia in the kitchen of her yellow house, talking about and making food. She was one of the key cookery mentors in my life.

During my year there, Nadia and I went through phases. We obsessed over French patisserie, and I made my first croissants in her oven. We made samosas and curries and south Asian feasts; Nadia was part-Indian, but hadn’t travelled, so my experience of growing up in a country with a huge South Asian food scene were a useful source of information for her. Then we obsessed over Middle Eastern food. I’ve always been more inclined to sweets, cakes and pastries, so I dug out recipes along those lines. Some made it into my journals.

After Nadia’s death, I revisited those journals and transcribed more of the recipes. This is one of them. It’s called cinnamon pistachio crescents in my notes and it says it’s of Middle Eastern origin. I’ve no idea if it is a genuinely Middle Eastern recipe either, or the Arabic name of these pastries. They may well be related to croissants though, given the shape and the high butter content, so perhaps they’re a hybrid of Arabic food heritage and French imperialism. A terrible lack of information, I know. All I know is that they’re a bit like croissants, but there’s no lamination here, so they’re a lot easier to master. Perhaps they’re related to the Jewish rugelach. If anyone does know the name of Arabic pastries like this, please do enlighten me!*

The recipe, now somewhat tweaked by me, may well be from a Middle Eastern cookbook my mother sent out to me in 1994. I saw it last, in October 2013, just after we’d left Rome and had gone travelling to see international friends and family: on a shelf in Nadia’s house in the Marlborough Sounds. Perhaps it’s still there. One day I may be able to check it, when we next visit NZ. Who knows? With the recent eleventh hour failure of our adoption match, I don’t really know what life holds next. While we nurse our bruised dreams I know at least there will be more baking.

Baking of things like these. I’m making them thinking of Nadia, bustling around her kitchen at Old Man Mountain, twenty years ago. I wish I could email her to ask her to look in that old recipe book. It’d take her a week to find the time away from her precious, precarious garden and connect to her agonisingly slow dial-up, but I miss her communiqués, her snatches of life, her ardent discussion of food.

1. Mix the yeast with the water. You can use tepid water to get the yeast going if you like, but as these have a long prove in the fridge it doesn’t really matter.
2. Stir in sugar.
3. Combine the flours in a bowl, add the salt, then mix in yeasty water, melted butter and egg. 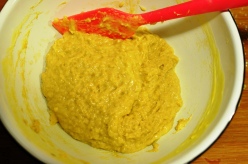 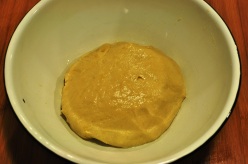 4. Mix up to a dough. It’s very moist from all the egg and melted butter so it really is a case of mixing, with a spatula. Cool the dough in the fridge a bit to firm up the butter then you can give it a knead, just to make sure everything is nicely homogenised.
5. Return the dough to a clean bowl, greased with a little oil, cover, then put in the fridge and leave for at least three hours, or even overnight.
6. Take the dough out of the fridge and allow it to come back to room temperature. (The butter will have set hard again, so it’ll be difficult to handle until it’s warmed up a bit again.)

7. Combine the cinnamon, sugar and chopped pistachios to make the filling.
8. Preheat the oven to 180C and prepare several baking sheets, lining them with parchment or silicone sheets. 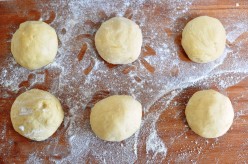 9. Divide the dough into six balls, each weight about 111g, then cover and let them rest for 10 minutes. 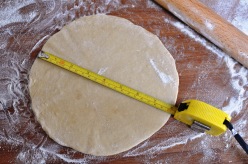 10. On a lightly floured surface, roll out each ball into a disc, keeping them moving to avoid sticking. Roll to about 20cm in diameter.

11. Sprinkle the filling onto the discs, then cut each one into eight segments.
12. Roll up the wedges, starting from the wide end, and shape into crescents. 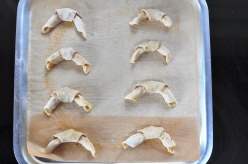 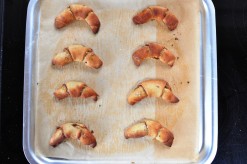 13. Place on baking sheets, cover and prove for about 20 minutes until slightly risen.
14. Bake for around 12 minutes, until nicely browned.
15. Cool on a wire rack.

I imagine these would go very well with a nice strong, short cup of coffee, but as I don’t drink it, I can’t say! I can say they also go nicely with tea, black or green. But the ideal drink to have them with would be that sweetened blend of black and mint tea, served in glasses, as drunk in Arabic world, especially the Maghreb. I like to think that when I first made them at Old Man Mountain in 1994, me and Nadia sat down to try them with a with a cuppa, critiquing them. Nadia probably said they were good, but she preferred savouries.

* Since writing this, I’ve done a little more research. In Arabic countries, such a pastry might be referred to as a sanbusaj, sambusak, sambosak. It’s the same in Hebrew. And similar in many other languages across the Middle East, western and southern Asia. Indeed, they’re probably all from the same Persian root word: sanbosag. A more familiar related word here in the UK is the Indian Subcontinent samosa.

But, you may be wondering, what’s a usually savoury, deep-fried parcel got in common with a crescent, yeasted dough, buttery pastry? Well, broadly, there’s all just variation on a theme of filled pastries. This recipe, for example, is savoury, but uses a similar technique to mine here, and as such nicely bridges the gap.

15 responses to “Pistachio-cinnamon pastries and memories of Nadia”